In January, we merged the following pull requests:

Thanks to @jarkkojs for their contribution!

This month, we merged the following changes:

Thanks to @abachmann, @Freax13, @phip1611, and @georglauterbach for their contributions!

We merged the following changes in January:

Thanks to @phip1611 for their contribution!

The multiboot2 crate provides abstraction types for the boot information of multiboot2 bootloaders. The latest release of the multiboot2-crate is now v.0.13.1 (was v0.12.2). It contains minor improvements, such as new getters that were originally missing.

The combined diff of all changes can be found here.

Want to contribute to a Rust OSDev project, but don't know where to start? Pick up one of these outstanding issues in one of our projects and get started!

No tasks were proposed for this section.

For those of you who are not running Windows: NTFS is the primary filesystem in Windows, from Windows NT's release in 1993 up to the current Windows 11. Unlike FAT32, NTFS has no practical limits for file and partition sizes, comes with B-Tree Indexes for faster lookups, and adds a few resilience and efficiency features (such as journaling, compression, and sparse files).

The ntfs crate supports Rust's no_std environment and is therefore not tied to a specific platform API. It aims to be embeddable in firmware-level code and kernels just as well as in user-mode applications.

Colin Finck will talk about NTFS and his adventures in writing a filesystem crate in Rust on the upcoming FOSDEM conference. The talk is on Saturday, 5 February at 17:00 (CET, UTC+1). The conference is virtual and admission is free.

Philipp Schuster released an initial version of his noto-sans-mono-bitmap crate this month. It provides a pre-rasterized bitmap font from Noto Sans Mono, an open font from Google. The crate is a replacement for legacy bitmap fonts, such as the font8x8 crate. It is suitable for printing high quality/nice looking text to a framebuffer in bootloaders, kernels and similar environments where you don't want or can't use the FPU. 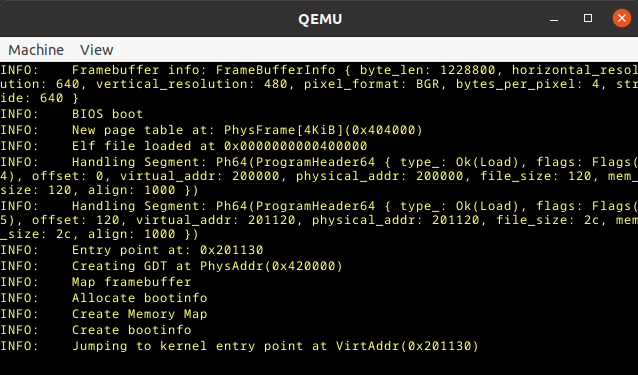 The screenshot above shows text that is rendered into an UEFI framebuffer using the bitmap font from noto-sans-mono-bitmap.

An example of usage can be found in PR#213 of the rust-osdev/bootloader crate, where this crate was merged and replaced font8x8.

This month, we merged three small improvements for the Writing an OS in Rust blog:

Thanks to @TisnKu for their contribution!

I have also brought the edition-3 branch up to date again. I marked all the stub posts of the upcoming third edition as drafts, which should allow us to merge the unfinished branch now and then prepare the new edition directly in the main branch (without publishing them yet). This way, we can avoid that the branches diverge too much.

Regarding the state of the new edition: I'm planning to release an extra post about UEFI booting first because that article is almost ready. For the main posts of the edition, I'm still waiting for a few cargo features, namely artifact dependencies, a package/target-specific way to enable the unstable build-std feature, and fixes for the experimental package.forced-target manifest key. I also intend to have the new version of the bootloader crate ready soon, which should make the build and test process simpler and more robust.