We merged the following changes in July:

In July, we merged the following changes:

Thanks to @Zildj1an for their contribution!

The xhci crate provides types of xHCI structures, such as Registers and TRBs.

We merged the following changes this month:

Thanks to @Demindiro and @ytoml for their contributions!

This Month, @dvdhrm started an initiative to get the *-unknown-uefi targets to Tier-2. As a first step, they added a detailed description of the platform to the rustc book. The entry is already published in the nightly release of the book.

Please reach out if you would like to help with this!

Theseus is a safe-language OS written from scratch in Rust that is in the process of migrating from pure academic research objectives to more general usability and legacy compatibility.

Theseus dynamically loads and links all components at runtime, and executes everything in a single address space and at a single privilege level. With this, Theseus employs intralingual design principles to maximally leverage the strengths of the Rust language, allowing the compiler to both view and semantically understand (and thus extend its safety checks to) all components from top-level apps to low-level kernel entities. Theseus strives to not only ensure isolation between different entity components and subsystems in the OS, but also to go further than language safety to provide various invariants that guarantee properties about most system-provided types. For more, check out the Theseus OS Book or our academic papers and presentations.

Theseus is fully open-source and always welcomes contributions from anyone.

Over the past month (or two), Theseus OS made significant progress on a variety of topics:

Check out the Theseus OS blog for the latest details.

On his quest to develop a ReactOS/Windows bootloader in Rust, Colin Finck released another building block as a reusable no_std crate this month. After nt-hive for reading Windows registry hive files and ntfs to access Microsoft's proprietary NTFS filesystem, the nt-list crate provides a type-safe and idiomatic Rust interface to work with Windows Linked Lists, known as LIST_ENTRY and SINGLE_LIST_ENTRY. This is what Windows, Windows drivers, and components influenced by Windows (e.g. UEFI) have been using for a long time to uniformly handle linked lists.

Colin's blog post goes into detail about some of the differences between textbook and Windows linked lists and the challenges in coming up with a safe Rust implementation. The final interface provided by nt-list is as simple to use as Vec while being fully compatible to the original LIST_ENTRY. The compatibility is proven in a WinDbg debugging session: 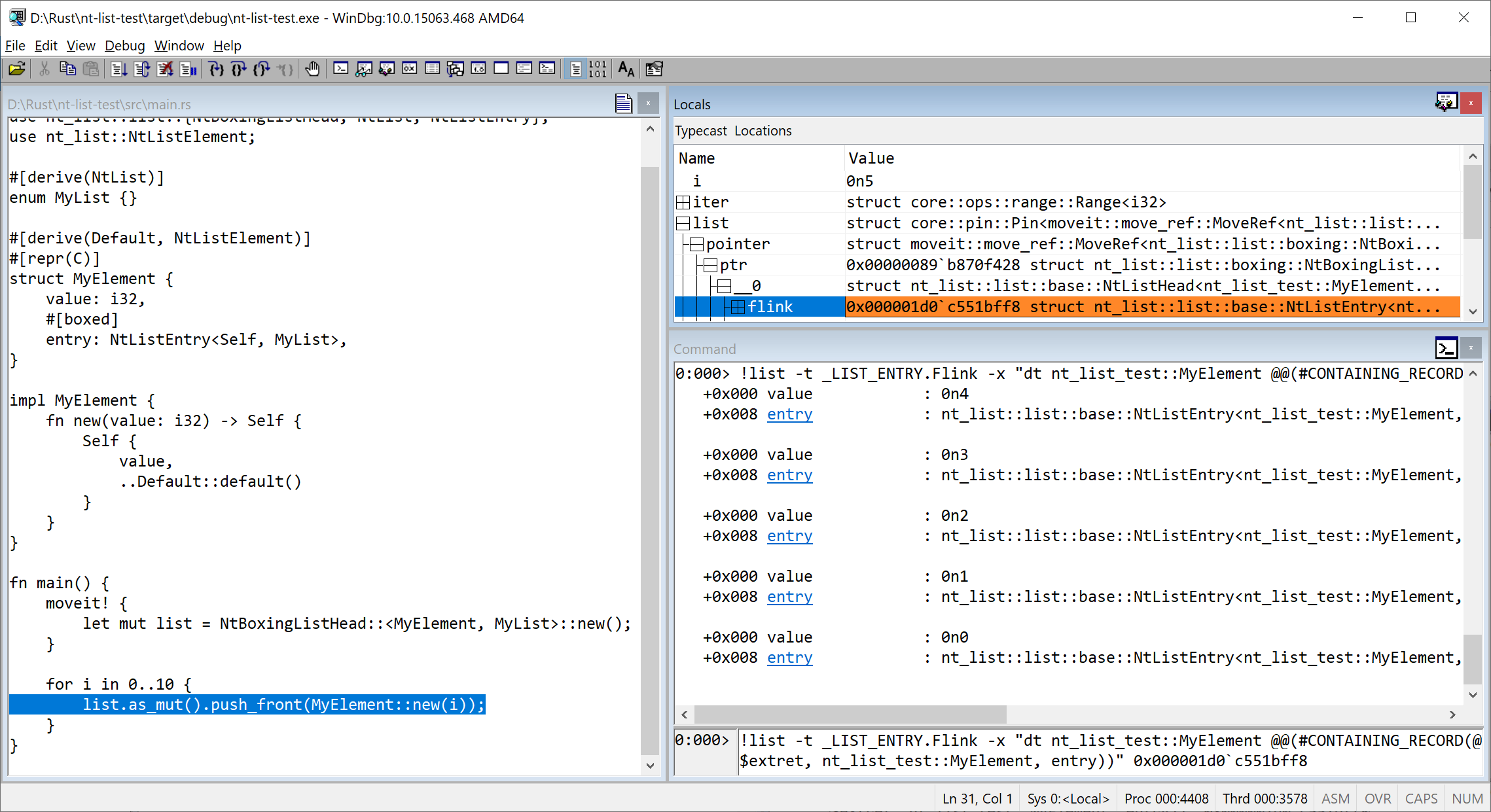 If you want to give it a spin, the crate is available on crates.io, and make sure to also check the docs.

In March 2022, Philipp Schuster proposed his simple-chunk-allocator crate. It focuses on being a very simple-to-use general purpose allocator that "just works" for various workloads in no_std context. However, there are other allocators, such as rust-osdev/linked-list-allocator. When you choose an allocator, you should not only consider the API and how to set it up, but actually the runtime characteristics. OS research has shown us that there is no perfect allocator. You can optimize an allocator for speed, memory utilization (i.e., prevent fragmentation), code simplicity, and worst case execution time. There exist different strategies to reach those goals: first-fit, next-fit, best-fit

In the end, there is no optimal allocator. You must choose which properties are more relevant for your scenario. For concrete measurements, please head to the README of simple-chunk-allocator.