This Month in Rust OSDev: October 2022

Thanks to @evanrichter for their contribution!

We merged the following changes this month:

Thanks to @phip1611, and @Freax13 for their contributions!

This month, we began work to remove acpi's dependence on the alloc crate for allocations, instead directly using the core::alloc::Allocator API. This improves support for bootloaders and kernels that want to treat memory allocation as fallible, allowing them to more gracefully recover from out-of-memory situations. In the future, we hope that this support will be brought into alloc, so that the library can return to using the standard containers.

These changes are not yet finished or released, but a new major version will likely be out in December with these changes, as well as better support for PCI topologies with multiple segment groups, and a few other changes. If you'd like to make use of these new features as they're developed, they're already in main, so you can use a Git dependency.

No tasks were proposed for this section this month.

Demilade Sonuga's Blog is a new blog on writing a simple blasterball game with no OS, no engine and minimal external crates. The blog's aim is to take a Rust beginner from starting the project to finishing it and understanding everything involved in the project's creation.

The project is still in it's early stages, so lots of feedback is very much needed.

Talk on Windows Linked Lists in safe and idiomatic Rust

At the first ever EuroRust conference from 13th to 14th October, Colin Finck gave a talk about the challenges of developing his nt-list crate. The crate provides a safe and idiomatic Rust wrapper around the Windows variant of Linked Lists. It was presented on this blog in July.

A recording of the talk has just been uploaded. Check it out, and also check out the other videos from that conference for some great takes on Rust! 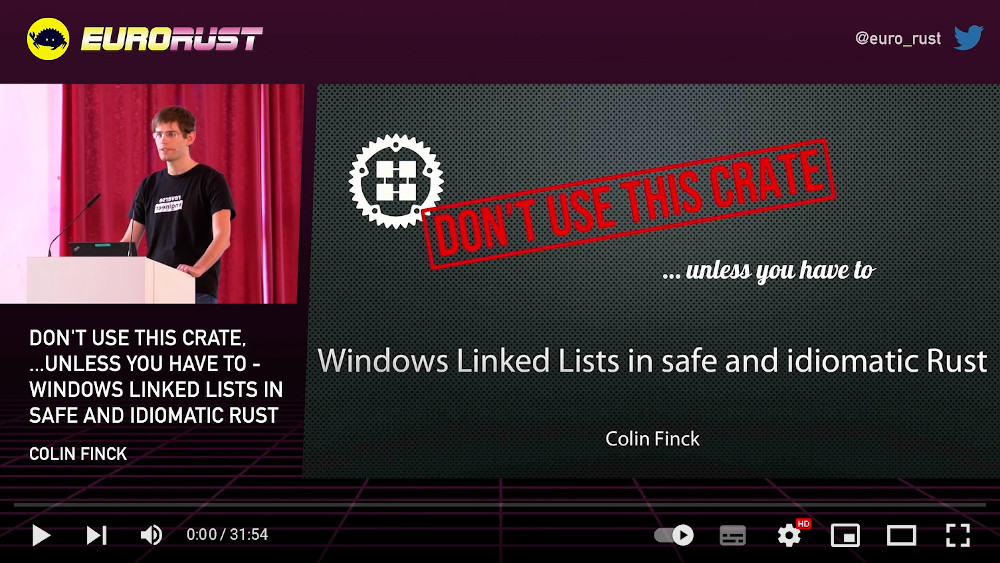 The new good_memory_allocator crate implements a no_std-compatible linked list allocator, inspired by the dlmalloc algorithm. It stores an additional usize of metadata per allocation, which decreases memory efficiency, but increased runtime efficiency. The README includes promising benchmark results that compare the crate against the linked-list-allocator and simple-chunk-allocator crates.

We merged the following changes to the Writing an OS in Rust blog this month: