Welcome to a new issue of "This Month in Rust OSDev". In these posts, we will give a regular overview of notable changes in the Rust operating system development ecosystem.

We started a new Showcase section this month, where we introduce and present interesting Rust OSDev projects. The first post of this section is:

If you like to present your project too, just let us know!

The bootloader crate implements a custom Rust-based bootloader for easy loading of 64-bit ELF executables. While we didn't merge any commits to our main branch this month, we made good process on the UEFI rewrite:

The acpi repository contains crates for parsing the ACPI tables – data structures that the firmware of modern computers use to relay information about the hardware to the OS. In Januar, we added some updates to the aml crate:

The cargo-xbuild project provides cargo command wrappers to cross-compile the sysroot crates core and alloc. This month, we fixed an error that occurred in combination with the XARGO_RUST_SRC environment variable:

Thanks to @astro for this contribution!

Even though we still maintain the cargo-xbuild crate, we recommend switching to cargo's own build-std feature that is always up-to-date with the latest Rust/Cargo changes. We wrote a short guide on how to switch to it, which is available in our Readme.

RustyHermit is a unikernel targeting a scalable and predictable runtime for high-performance and cloud computing. This month, we revise the paravirtualized network driver (virtio) and add a simple driver for RTL8139, which Qemu is able to emulate. With the support of KubeVirt, Kubernetes is able to orchestrate RustyHermit applications. As simple show case is explained in RustyHermit's wiki.

In this section, we describe updates to personal projects that are not directly related to the rust-osdev organization. Feel free to create a pull request with the updates of your OS project for the next post.

We made good progress on the Persian and Japanese translations of the "Writing an OS in Rust" blog this month:

In addition to the new translations, we merged the following improvements:

Thanks to @delta1, @NickSchmitt, @nana0-0, and @EvanMu96 for these contributions!

As I already mentioned in the previous posts, I'm working on a new 3rd edition of the blog. The new edition will be compatible with UEFI, use a pixel-based framebuffer, and utilize the APIC instead of the legacy PIC for interrupt handling.

As mentioned above, we added support for UEFI disk image creation to the new bootloader version this month. This made it finally possible to start the rewritten blog_os code in UEFI mode on real hardware: 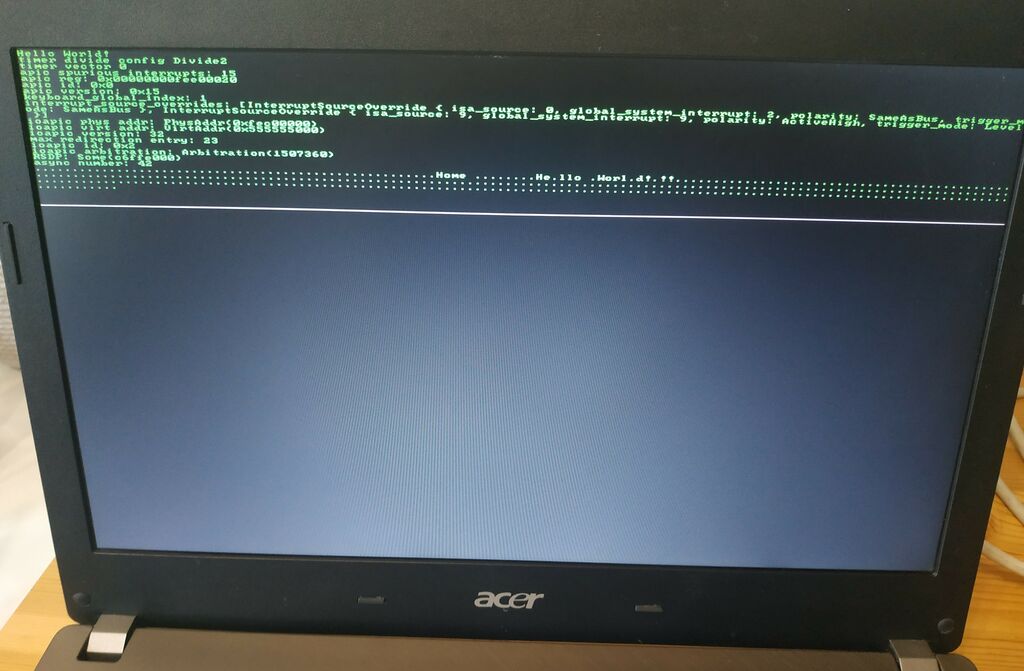 This is an old Acer TravelMate laptop of mine, booting from a USB stick. The output shows that it successfully sets up the local and IO-APIC for interrupt handling and then listens for timer and keyboard interrupts, just as before. The screen output is now based on a pixel-based framebuffer, using the font8x8 crate for simple font rendering. The memory management code required almost no changes, since the interface provided by the bootloader stayed almost the same (there are only some differences in the memory map format).